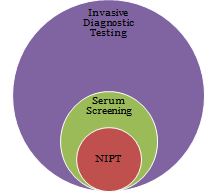 In the April issue of the American Journal of Obstetrics & Gynecology (AJOG), a team lead by John Williams, III report on their findings of the impact of NIPGS’ introduction into clinical practice.

The full article can be reviewed here (subscription required). Here are the highlights:

The authors note that there was no difference in the referral rate for genetic counseling and diagnostic testing based on first-trimester combined or second trimester quad-screen results, suggesting a greater reliance on the accuracy of NIPGS than traditional screening. Further, there was no apparent decrease in the overall birthrate to account for the reductions in referrals post-NIPGS.

From the report, the authors draw the following conclusions and concerns:

This concern of NIPGS’ limited scope missing a significant number of other conditions has been noted in other studies, which the graphic with this post illustrates.

Williams et al. further are concerned about the reduction in diagnostic testing due to the appeal of NIPGS being noninvasive and therefore not carrying a risk of miscarriage. They note that:

[I]nvasive diagnostic procedures (CVS and amniocentesis) have been shown to be relatively safe, particularly in the hands of experienced operators. In experienced hands, both have been reported to carry procedure-related loss rates of approximately 1 in 400.

To their credit, the authors recognize the impact decreased invasive procedures will have on increasing the risk of those procedures:

[A]s the number of referrals for diagnostic testing continues to decline, some CVS and amniocentesis practitioners may lose their technical skills. … It is possible that practitioners who were able to perform enough diagnostic procedures to maintain competency prior to the introduction of [NIPGS] into clinical practice may not be able to maintain their skills.

(I wrote about this inverse relationship between the number of procedures and the risk of invasive testing for a presentation at the 2013 American College of Medical Genetics & Genomics annual conference).

Finally, Williams et al. make an observation that may not be appreciated by the laymen or their professional colleagues.

The “greater concern” noted above, of women with single-gene conditions not being referred for diagnostic testing, the authors postulate could be due to a misunderstanding on the limitations of NIPGS by patients and clinicians. Williams et al. suggest that future studies assess patient and clinician “understanding of the differences between prenatal screening and diagnostic tests.”

NIPGS is resulting in fewer women being referred for genetic counseling and diagnostic testing due to an apparent reliance on the accuracy of NIPGS which may be misplaced, particularly for conditions not detected by NIPGS. This reduction may lead to more misdiagnoses, i.e. women not being diagnosed who otherwise would have but for relying on the limited scope of NIPGS, and an increased risk for invasive testing due to the plummeting number of procedures. As a result, the article’s final sentence is suitable for ending this post as well:

In addition, with the current and future complexities of diagnostic genetic testing, genetic counseling should be offered to all patients considering any type of genetic screening or diagnostic testing.